From Cibernética Americana
This article is about the general concept. For other uses, see en:Belief (disambiguation).

Belief is a psychological state in which an individual holds a conjecture or premise to be true.[1] Dispositional and occurrent belief concerns the contextual activation of the belief into thoughts (reactive of propositions) or ideas (based on the belief's premise). 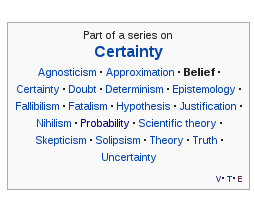 The terms belief and knowledge are used differently in philosophy.

Epistemology is the philosophical study of knowledge and belief. The primary problem in epistemology is to understand exactly what is needed in order for us to have knowledge. In a notion derived from Plato's dialogue Theaetetus, philosophy has traditionally defined knowledge as "justified true belief". The relationship between belief and knowledge is that a belief is knowledge if the belief is true, and if the believer has a justification (reasonable and necessarily plausible assertions/evidence/guidance) for believing it is true.

A false belief is not considered to be knowledge, even if it is sincere. A sincere believer in the flat earth theory does not know that the Earth is flat. Later epistemologists, for instance Gettier (1963)[2] and Goldman (1967),[3] have questioned the "justified true belief" definition.

As a psychological phenomenon

Mainstream psychology and related disciplines have traditionally treated belief as if it were the simplest form of mental representation and therefore one of the building blocks of conscious thought. Philosophers have tended to be more abstract in their analysis, and much of the work examining the viability of the belief concept stems from philosophical analysis.

The concept of belief presumes a subject (the believer) and an object of belief (the proposition). So, like other propositional attitudes, belief implies the existence of mental states and intentionality, both of which are hotly debated topics in the philosophy of mind, whose foundations and relation to brain states are still controversial.

Beliefs are sometimes divided into core beliefs (that are actively thought about) and dispositional beliefs (that may be ascribed to someone who has not thought about the issue). For example, if asked "do you believe tigers wear pink pajamas?" a person might answer that they do not, despite the fact they may never have thought about this situation before.[4]

That a belief is a mental state has been seen by some as contentious. While some have argued that beliefs are represented in the mind as sentence-like constructs, others have gone as far as arguing that there is no consistent or coherent mental representation that underlies our common use of the belief concept and that it is therefore obsolete and should be rejected.

This has important implications for understanding the neuropsychology and neuroscience of belief. If the concept of belief is incoherent, then any attempt to find the underlying neural processes that support it will fail.

To "believe in" someone or something is a distinct concept from "believe-that." There are two types of belief-in:[6]

Delusions are defined as beliefs in psychiatric diagnostic criteria (for example in the Diagnostic and Statistical Manual of Mental Disorders). Psychiatrist and historian G.E. Berrios has challenged the view that delusions are genuine beliefs and instead labels them as "empty speech acts," where affected persons are motivated to express false or bizarre belief statements due to an underlying psychological disturbance. However, the majority of mental health professionals and researchers treat delusions as if they were genuine beliefs.

In Lewis Carroll's Through the Looking-Glass the White Queen says, "Why, sometimes I've believed as many as six impossible things before breakfast." This is often quoted in mockery of the common ability of people to entertain beliefs contrary to fact.

We are influenced by many factors that ripple through our minds as our beliefs form, evolve, and may eventually change

Psychologists study belief formation and the relationship between beliefs and actions. Beliefs form in a variety of ways:

However, even educated people, well aware of the process by which beliefs form, still strongly cling to their beliefs, and act on those beliefs even against their own self-interest. In Anna Rowley's book, Leadership Therapy, she states "You want your beliefs to change. It's proof that you are keeping your eyes open, living fully, and welcoming everything that the world and people around you can teach you." This means that peoples' beliefs should evolve as they gain new experiences.[13]

There are several techniques to change the internal beliefs.[14][15]

A belief system is a set of mutually supportive beliefs. The beliefs of any such system can be classified as religious, philosophical, ideological, or a combination of these. Philosopher Jonathan Glover says that beliefs are always part of a belief system, and that tenanted belief systems are difficult for the tenants to completely revise or reject.[16] 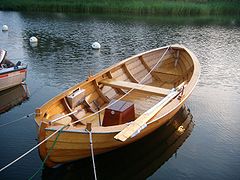 Philosopher Jonathan Glover warns that belief systems are like whole boats in the water; it is extremely difficult to alter them all at once (e.g., it may be too stressful, or people may maintain their biases without realizing it). [16]

The British philosopher Stephen Law has described some belief systems (including belief in homeopathy, psychic powers, and alien abduction) as "claptrap" and said that they "draw people in and hold them captive so they become willing slaves to victory... if you get sucked in, it can be extremely difficult to think your way clear again".[17]

Jonathan Glover believes that he and other philosophers ought to play some role in starting dialogues between people with deeply held, opposing beliefs, especially if there is risk of violence. Glover also believes that philosophy can offer insights about beliefs that would be relevant to such dialogue.

Glover suggests that beliefs have to be considered holistically, and that no belief exists in isolation in the mind of the believer. It always implicates and relates to other beliefs.[16] Glover provides the example of a patient with an illness who returns to a doctor, but the doctor says that the prescribed medicine is not working. At that point, the patient has a great deal of flexibility in choosing what beliefs to keep or reject: the patient could believe that the doctor is incompetent, that the doctor's assistants made a mistake, that the patient's own body is unique in some unexpected way, that Western medicine is ineffective, or even that Western science is entirely unable to discover truths about ailments.[16]

Glover maintains that any person can continue to hold any belief if they would really like to[16] (e.g., with help from ad hoc hypotheses). One belief can be held fixed, and other beliefs will be altered around it. Glover warns that some beliefs may not be entirely explicitly believed (e.g., some people may not realize they have racist belief systems adopted from their environment as a child). Glover believes that people tend to first realize that beliefs can change, and may be contingent on our upbringing, around age 12 or 15.[16]

Glover emphasizes that beliefs are difficult to change. He says that we may try to rebuild our beliefs on more secure foundations (axioms), like building a new house, but warns that this may not be possible. Glover offers the example of René Descartes, saying about Descartes that "[h]e starts off with the characteristic beliefs of a 17th-century Frenchman; he then junks the lot, he rebuilds the system, and somehow it looks a lot like the beliefs of a 17th-century Frenchman." To Glover, belief systems are not like houses but are instead like boats. As Glover puts it: "Maybe the whole thing needs rebuilding, but inevitably at any point you have to keep enough of it intact to keep floating."[16]

Glover's final message is that if people talk about their beliefs, they may find more deep, relevant, philosophical ways in which they disagree (e.g., less obvious beliefs, or more deeply held beliefs). Glover thinks that people often manage to find agreements and consensus through philosophy. He says that at the very least, if people do not convert each other, they will hold their own beliefs more openmindedly and will be less likely to go to war over conflicting beliefs.[18][16]

In the philosophy of rationalism, the term dispositional belief is holding something in one’s attention that may or may not be true, and keeping it there, putting it up for comparison’s sake with all else that is in one’s sphere of attention, to see how it holds up (in German, vorstellen). For a belief to gain strength, and footing, and gradually to approach closer to certainty, it must be consistent and harmonious with whatever else is held in one’s attention. And so there are levels of belief, for a belief starts as an imagination, a conceptualization, an idea. The belief firms up when it becomes an inspiration, you breath it in with enthusiasm, it harmonizes not only with your thoughts, but with your feelings. Of course, for the most part, feelings are dreamily semi-conscious, so to raise a belief to an inspiration, one has to become conscious of one’s feelings, one must be able to attend to one’s feelings, one must be able to hold one’s feelings at the center of attention in a fully conscious way. A person must know his feelings, which is harder than knowing one’s thoughts, as feelings are normally colored by one’s social setting, by, so to speak, one’s prejudices. And finally, belief may reach the level of intuition when it is fully in accord and harmonizes with the entirety of the world of being a human being, which is all that we can know, but for this to happen, it must harmonize, be in accord with one’s willing nature, which is, for the most part, fully unconscious. Willpower, one’s willed directives, intentions, motivations must become fully conscious in order for a belief to become an intuition. Since becoming fully conscious, particularly of the will, is a matter for the distant future, beliefs, by nature, always retain the quality of being less than fully clear. This is why beliefs always have the quality of coloring one’s disposition, mood, demeanor, and are never fully occurrent. And this is in contrast to other pneumatological activity, that is, technique, science, poetry, and recognition.

Dispositional beliefs can be formed without ever having been an occurrent belief—for example, if a vehicle passes by whilst a person is engaged in conversation, it may become a dispositional belief that "a vehicle passed by" immediately, as the matter was never consciously considered. To extend the computer analogy, this could be seen as being like downloading files directly to the hard disk without opening them.