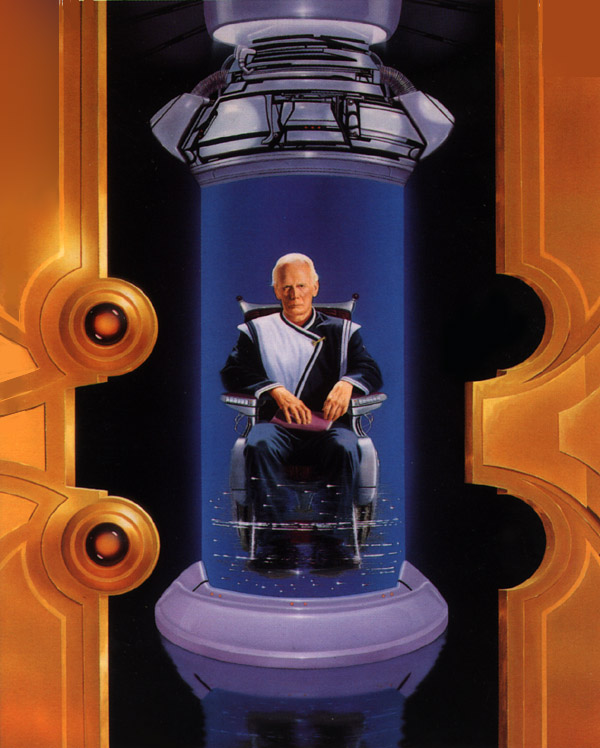 I am Hari Seldon.

As you see, I am confined to this chair and cannot rise to greet you. Your grandparents left for Terminus a few months back in my time and since then I have suffered a rather incovenient paralysis. I can't see you, you know, so I can't greet you properly. I don't even know how many of you there are, so all this must be conducted informally. If any of you are standing, please sit down; if you care to smoke I woulon't mind. Why should I? I'm not really here.

It is fifty years now since this Foundation was established, — fifty years in which the members of the Foundation have been ignorant of what it was they were working toward. It was necessary that they be ignorant, but now the necessity is gone.

The Encyclopedia Foundation, to begin with is a fraud, and always has been!

It is a fraud in the sense that neither I nor my colleagues care at all whether a single volume of the Encyclopedia is ever published. It has served its purpose since by it we extracted an imperial charter from the Emperor, by it we attracted the hundred thousand humans necessary for our scheme, and by it we managed to keep them preoccupied while events shaped themselves, until it was too late for any of them to draw back.

In the fifty years that you have been working on this fraudulent project—there is no use in softening the phrases—your retreat has been cut off, and you have now no choice but to proceed on the infinitely more important project that was, and is, our real plan.

To that end we have placed you on such a planet and at such a time that in fifty years you were maneuvered to the point where you no longer have freedom of action. From now on, and into the centuries, the path you must take is inevitable. You will be faced with a series of crises, as you are now faced with the first, and in each case your freedom of action will become similarly circumscribed so that you will be forced along one, and only one path.

It is that path our psychology has worked out—and for a reason.

For decades the institutions of your society have stagnated and declined, though while widely observed until recent events only a few ever realized how far. But now, those institution will attempt to repair and restore with a Claudius to follow a Caligula. In the Julio-Claudian period the fullest flowering of Empire of Rome was still a century in the future. Nonetheless, the virtuous Republic founded upon the eviction of the Etruscan autocrats was dead and had just experienced its first monster of the autocracy. Somewhere in the fifty years just past is where the historians of the future will place an arbitrary line and say: "This marks the Fall of the American Empire."