The public wiki is not an appropriate place for unofficial estimation of Gini for those countries for which it isn't currrently available but the following are of interest:

I also want to update my comments on the English bookmarks page and say something about the global value.

The Gini coefficient is a measure of statistical dispersion developed by the Italian statistician Corrado Gini and published in his 1912 paper "Variability and Mutability" (Template:Lang-it). It is commonly used as a measure of inequality of income or wealth. It has, however, also found application in the study of inequalities in disciplines as diverse as health science, ecology, and chemistry. 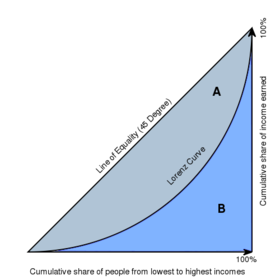 Graphical representation of the Gini coefficient.

The graph shows that while the Gini is technically equal to the area marked 'A' divided by the sum of the areas marked 'A' and 'B' (that is, Gini = A/(A+B)), it is also equal to 2*A, since A+B = 0.5 since the axes scale from 0 to 1, and the total surface of the graph therefore equals 1.

The Gini coefficient can range from 0 to 1; it is sometimes multiplied by 100 to range between 0 and 100. A low Gini coefficient indicates a more equal distribution, with 0 corresponding to perfect equality, while higher Gini coefficients indicate more unequal distribution, with 1 corresponding to perfect inequality. To be validly computed, no negative goods can be distributed. Thus, if the Gini coefficient is being used to describe household income inequality, then no household can have a negative income. When used as a measure of income inequality, the most unequal society will be one in which a single person receives 100% of the total income and the remaining people receive none (G=1); and the most equal society will be one in which every person receives the same percentage of the total income (G=0).

As a mathematical measure of inequality, the Gini coefficient carries no moral judgement about whether a particular level of (in)equality is good or bad.

Although the Gini coefficient is most popular in economics, it can in theory be applied in any field of science that studies a distribution. For example, in ecology the Gini coefficient has been used as a measure of biodiversity, where the cumulative proportion of species is plotted against cumulative proportion of individuals[1]. In health, it has been used as a measure of the inequality of health related quality of life in a population[2]. In chemistry it has been used to to express the selectivity of protein kinase inhibitors against a panel of kinases[3].

In some cases, this equation can be applied to calculate the Gini coefficient without direct reference to the Lorenz curve. For example:

is a consistent estimator of the population Gini coefficient, but is not, in general, unbiased. Like, G, G(S) has a simpler form:

There does not exist a sample statistic that is in general an unbiased estimator of the population Gini coefficient, like the relative mean difference.

Sometimes the entire Lorenz curve is not known, and only values at certain intervals are given. In that case, the Gini coefficient can be approximated by using various techniques for interpolating the missing values of the Lorenz curve. If ( X k , Yk ) are the known points on the Lorenz curve, with the X k indexed in increasing order ( X k - 1 < X k ), so that:

If the Lorenz curve is approximated on each interval as a line between consecutive points, then the area B can be approximated with trapezoids and:

is the resulting approximation for G. More accurate results can be obtained using other methods to approximate the area B, such as approximating the Lorenz curve with a quadratic function across pairs of intervals, or building an appropriately smooth approximation to the underlying distribution function that matches the known data. If the population mean and boundary values for each interval are also known, these can also often be used to improve the accuracy of the approximation.

The Gini coefficient calculated from a sample is a statistic and its standard error, or confidence intervals for the population Gini coefficient, should be reported. These can be calculated using bootstrap techniques but those proposed have been mathematically complicated and computationally onerous even in an era of fast computers. Ogwang (2000) made the process more efficient by setting up a “trick regression model” in which the incomes in the sample are ranked with the lowest income being allocated rank 1. The model then expresses the rank (dependent variable) as the sum of a constant A and a normal error term whose variance is inversely proportional to yk;

Ogwang showed that G can be expressed as a function of the weighted least squares estimate of the constant A and that this can be used to speed up the calculation of the jackknife estimate for the standard error. Giles (2004) argued that the standard error of the estimate of A can be used to derive that of the estimate of G directly without using a jackknife at all. This method only requires the use of ordinary least squares regression after ordering the sample data. The results compare favorably with the estimates from the jackknife with agreement improving with increasing sample size. The paper describing this method can be found here: http://web.uvic.ca/econ/ewp0202.pdf

However it has since been argued that this is dependent on the model’s assumptions about the error distributions (Ogwang 2004) and the independence of error terms (Reza & Gastwirth 2006) and that these assumptions are often not valid for real data sets. It may therefore be better to stick with jackknife methods such as those proposed by Yitzhaki (1991) and Karagiannis and Kovacevic (2000). The debate continues.

The Gini coefficient can be calculated if you know the mean of a distribution, the number of people (or percentiles), and the income of each person (or percentile). Princeton development economist Angus Deaton (1997, 139) simplified the Gini calculation to one easy formula:

where u is mean income of the population, Pi is the income rank P of person i, with income X, such that the richest person receives a rank of 1 and the poorest a rank of N. This effectively gives higher weight to poorer people in the income distribution, which allows the Gini to meet the Transfer Principle.

Income Gini indices in the world

A complete listing is in list of countries by income equality; the article economic inequality discusses the social and policy aspects of income and asset inequality.

While most developed European nations and Canada tend to have Gini indices between 24 and 36, the United States' and Mexico's Gini indices are both above 40, indicating that the United States and Mexico have greater inequality. Using the Gini can help quantify differences in welfare and compensation policies and philosophies. However it should be borne in mind that the Gini coefficient can be misleading when used to make political comparisons between large and small countries (see criticisms section).

The Gini index for the entire world has been estimated by various parties to be between 56 and 66.[4][5]

US income Gini indices over time

Gini indices for the United States at various times, according to the US Census Bureau:[6]

In 2005 the Gini index for the EU was estimated at 31.[8]. This is surprisingly low, since the EU has virtually no interstate income redistribution power (the EU budget is only ~1% of the total GDP, there are no EU taxes, there is no EU social policy, and no EU treasury); moreover, a number of poorer new member states joined in 2004.

Advantages of Gini coefficient as a measure of inequality

Disadvantages of Gini coefficient as a measure of inequality

For this reason, the scores calculated for individual countries within the EU are difficult to compare with the score of the entire US: the overall value for the EU should be used in that case, 31.3[9], which is still much lower than the United States', 45.[10] Using decomposable inequality measures (e.g. the Theil index <math>T</math> converted by <math>1-{e^{-T}}</math> into a inequality coefficient) averts such problems.

Problems in using the Gini coefficient

As one result of this criticism, in addition to or in competition with the Gini coefficient entropy measures are frequently used (e.g. the Theil Index and the Atkinson index). These measures attempt to compare the distribution of resources by intelligent agents in the market with a maximum entropy random distribution, which would occur if these agents acted like non-intelligent particles in a closed system following the laws of statistical physics.

The discriminatory power refers to a credit risk model's ability to differentiate between defaulting and non-defaulting clients. The above formula <math>G_1</math> may be used for the final model and also at individual model factor level, to quantify the discriminatory power of individual factors. This is as a result of too many non defaulting clients falling into the lower points scale e.g. factor has a 10 point scale and 30% of non defaulting clients are being assigned the lowest points available e.g. 0 or negative points. This indicates that the factor is behaving in a counter-intuitive manner and would require further investigation at the model development stage.