Purchasing Power Parity (PPP) of Gross Domestic Product for the countries of the world as of 2003. The economy of the United States is used as a reference, so that country is set at 100. Bermuda has the highest index value, 154, thus goods sold in Bermuda are 54% more expensive than in the United States.

Purchasing power parity (PPP) is an alternative measure of the wealth of nations based on the long-term equilibrium exchange rate of two currencies to equalize their purchasing power. Developed by Gustav Cassel in 1918,[1] it is based on the law of one price: the theory states that, in ideally efficient markets, identical goods should have only one price.

This purchasing power SEM rate equalizes the purchasing power of different currencies in their home countries for a given basket of goods. Using a PPP basis is arguably more useful when comparing differences in living standards on the whole between nations because PPP takes into account the relative cost of living and the inflation rates of different countries, rather than just a nominal (GDP) comparison. The best-known and most-used purchasing power parity exchange rate is the Geary-Khamis dollar (the "international dollar").

PPP exchange rate (the "real exchange rate") fluctuations are mostly due to market exchange rate movements. Aside from this volatility, consistent deviations of the market and PPP exchange rates are observed, for example (market exchange rate) prices of non-traded goods and services are usually lower where incomes are lower. (A U.S. dollar exchanged and spent in India will buy more haircuts than a dollar spent in the United States). PPP takes into account this lower cost of living and adjusts for it as though all income was spent locally. In other words, PPP is the amount of a certain basket of basic goods which can be bought in the given country with the money it produces.

There can be marked differences between PPP and market exchange rates. [2] For example, the World Bank's World Development Indicators 2005 estimated that in 2003, one United States dollar was equivalent to about 1.8 Chinese yuan by purchasing power parity [3] — considerably different from the nominal exchange rate that put one dollar equal to 7.6 yuan. This discrepancy has large implications; for instance, GDP per capita in the People's Republic of China is about US$1,800 while on a PPP basis it is about US$7,204. This is frequently used to assert that China is the world's second-largest economy, but such a calculation would only be valid under the PPP theory. At the other extreme, Japan's nominal GDP per capita is around US$37,600, but its PPP figure is only US$30,615.

Let $P be the value in dollars of a representative basket of goods, and £P the value in pounds sterling of the same basket. We call $P/£P the PPP exchange rate.

Relative PPP relates the inflation rate (the change of price levels) in each country to the change in the market exchange rate.

where <math>S_t</math> is the spot rate in Foreign Currency/Domestic Currency and <math>P_t</math> is the price level in period t (foreign values are marked by an asterisk). This relation is necessary but not sufficient for absolute purchasing power parity.

Note that it is incorrect to do the calculation by subtracting percentages - one must use the above formula, getting 1.01/1.03 = .98, i.e. a 2% depreciation of the USD. With larger price rises, the difference between the incorrect and the correct formula becomes larger.

PPP equalization and the law of one price

The law of one price states that differing prices of a traded good will tend to equalize in the absence of tariffs, other barriers to trade and prohibitively high shipping rates. The law of one price can also be stated as: "In an efficient market all identical goods must have only one price."

The PPP hypothesis is that free trade of goods will align exchange rates with their PPP values. However, econometric analysis rejects this hypothesis, and gives a better prediction of the PPP/exchange rate relationship (the CPI) based on relative GDPs. Neo-classical economics includes Balassa-Samuelson effect theory, which explains the PPP model adjustment giving the equilibrium CPIs.

The PPP exchange-rate calculation is controversial because of the difficulties of finding comparable baskets of goods to compare purchasing power across countries.

Estimation of purchasing power parity is complicated by the fact that countries do not simply differ in a uniform price level; rather, the difference in food prices may be greater than the difference in housing prices, while also less than the difference in entertainment prices. People in different countries typically consume different baskets of goods. It is necessary to compare the cost of baskets of goods and services using a price index. This is a difficult task because purchasing patterns and even the goods available to purchase differ across countries. Thus, it is necessary to make adjustments for differences in the quality of goods and services. Additional statistical difficulties arise with multilateral comparisons when (as is usually the case) more than two countries are to be compared.

When PPP comparisons are to be made over some interval of time, proper account needs to be made of inflationary effects. 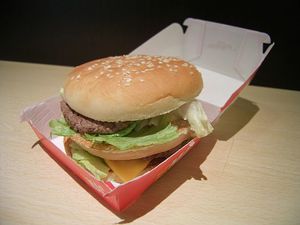 Big Mac hamburgers, like this one from Japan, are similar world-wide.

Template:Mainarticle An example of one measure of PPP is the Big Mac Index popularized by The Economist, which looks at the prices of a Big Mac burger in McDonald's restaurants in different countries. If a Big Mac costs USD$4 in the U.S. and GBP£3 in Britain, the PPP exchange rate would be £3 for $4. The Big Mac Index is presumably useful because it is based on a well-known good whose final price, easily tracked in many countries, includes input costs from a wide range of sectors in the local economy, such as agricultural commodities (beef, bread, lettuce, cheese), labor (blue and white collar), advertising, rent and real estate costs, transportation, etc. The Big Mac Index is inaccurate in certain cases because of the different market conditions that exist in differing McDonald's locations. For instance, a Big Mac in downtown Chicago is likely to be priced higher than one in Wisconsin. Such pricing differences existing in one country demonstrate the imperfection of the Big Mac Index. In addition, in some emerging economies western fast food represents an expensive niche product price well above the price of traditional staples - i.e. the Big Mac is not a mainstream 'cheap' meal as it is in the west but a luxury import for the middle classes and foreigners. Although it is not perfect, the index still offers significant insight and an easy example to the understanding of PPP.

Need for PPP adjustments to GDP

Using market exchange rates to compare countries' standard of living or per capita Gross Domestic Product can give a very misleading picture. The exchange rate only reflects traded goods in contrast to non-traded ones. Also, currencies are traded for purposes other than trade in goods and services, e.g., to buy capital assets whose prices vary more than those of physical goods. Also, different interest rates, speculation, hedging or interventions by central banks can influence the foreign-exchange market.

The PPP method is used as an alternative.

For example, if the value of the Mexican peso falls by half compared to the U.S. dollar, the Mexican Gross Domestic Product measured in dollars will also halve. However, this exchange rate results from international trade and financial markets. It does not necessarily mean that Mexicans are poorer by a half; if incomes and prices measured in pesos stay the same, they will be no worse off assuming that imported goods are not essential to the quality of life of individuals. Measuring income in different countries using PPP exchange rates helps to avoid this problem.

PPP calculations are often used to measure poverty rates. For problems with this methodology, see How Not To Count The Poor.

Range and quality of goods

The goods that the currency has the "power" to purchase are a basket of goods of different types:

More processed and expensive products are likely to be tradable, falling into the second category, and drifting from the PPP exchange rate to the currency exchange rate. Even if the PPP "value" of the Chinese currency is five times stronger than the currency exchange rate, it won't buy five times as much of internationally traded goods like steel, cars and microchips, but non-traded goods like housing, services ("haircuts"), and domestically produced rice. The relative price differential between tradables and non-tradables from high-income to low-income countries is a consequence of the Balassa-Samuelson effect, and gives a big cost advantage to labour intensive production of tradable goods in low income countries (like China), as against high income countries (like Switzerland). The corporate cost advantage is nothing more sophisticated than access to cheaper workers, but because the pay of those workers goes further in low-income countries than high, the relative pay differentials (inter-country) can be sustained for longer than would be the case otherwise. (This is another way of saying that the wage rate is based on average local productivity, and that this is below the per capita productivity that factories selling tradable goods to international markets can achieve. This is sometimes called exploitation.) An equivalent cost benefit comes from non-traded goods that can be sourced locally (nearer the PPP-exchange rate than the nominal exchange rate in which receipts are paid). These act as a relatively cheaper factor of production than is available to factories in richer countries.

While using PPP exchange rates for income comparison is an improvement over using market exchange rates, it is still imperfect, and comparisons using the PPP method can still be misleading. Comparing standards of living using the PPP method implicitly assumes that the real value placed on goods is the same in different countries. In reality, what is considered a luxury in one culture could be considered a necessity in another. The PPP method does not account for this. (This is not primarily a flaw in the exchange rate methodology, as cultural and interpersonal differences in utility functions are a more fundamental microeconomic problem.)

A PPP exchange rate varies depending on the choice of goods used for the index (CPI). Hence, it is possible to deliberately or accidentally bias a PPP exchange rate by the choice of a bundle. Indeed, it may be hard to construct equivalent representative bundles for the consumption habits of very different societies. PPP could also have difficulty accounting for differences in quality between goods in one country and equivalent goods in another, see: consumer price index.

Clarification to PPP Numbers of the IMF